A Thriving Tradition on Stage — THE GENTEEL SABAI at KT

The Genteel Sabai, playing at Kennedy Theatre through February 12, marks only the third time that UH Mānoa has presented Randai, a traditional martial arts–based theatre form of the Minangkabau people of West Sumatra. I was fortunate enough to perform in the previous version seven years ago, so the following are observations from an Anak Randai (child of Randai).

The performers enter from the back of the house, which gives the audience a taste of what it feels like to be up-close and personal. But if you want to get the true Randai experience, arrive early to grab a space in the first-come, first-served “on stage” seating area. This will allow you to be just inches away from the performers, similar to a traditional village experience. Sitting on stage, I could literally see the sweat on the brows of the hard-working dancers. This is an extremely physical theatre style based on the Indonesian martial art form of Silek and the performers have been training in this discipline since early last fall. Knowing first-hand how much work is involved in being a dancer, I was very impressed by this new crop of Anak Randai—especially Amanda Stone and Harold Wong, both of whom showed incredible skill and focus.

Led by the Goreh, who signals the group with vocal cues so that they move in unison, the circle of dancers match intricate dance/fight movements and tapuak (rhythmic percussion done by slapping pants or clapping hands) to songs that serve as exposition for the storyline. A group of musicians and singers visible just off stage relay the story through song during the dance sequences. For this production, a lot of Minang language was used along with English in the songs, which I felt added a beautiful ambience though I could not understand the words.

Between the dance sequences, there are acting scenes spoken in verse. The story centers around a young girl (Sabai) who the King has fallen for after having been rejected by her mother years ago. The King will stop at nothing to make the young Sabai his own and sends a Matchmaker to offer gifts to her parents. His offer rejected, the King confronts her father and a fight ensues. Later, the King approaches Sabai, who can no longer remain genteel and defends herself.

In previous versions of Randai at Kennedy Theatre, the actors’ positions of their hands and body were very specific, but for this current production, Director Kirstin Pauka informed me that the convention was not as rigidly enforced. As a result, performer Alex Rogals was allowed to create a “3 Stooges” type of interaction between the two guards (Rogals and Trevor H. Craighead) that elicited plenty of giggles from the younger audience members. Christopher McGahan also has some funny moments in his scenes as the well-intentioned Matchmaker.

Nicholas Murray Husted as Rajo Babandiang has a powerful presence, in both his dramatic scenes with his daughter Sabai (played with grace by Jenilea Michaela Heath) and his very athletic fight scene with the King (Lavour Vernon Addison). Their fight sequence was the best I have seen in all of the three Randai performances that I have witnessed on the Kennedy Theatre stage. Addison is a stand-out in his fantastic portrayal of King/bad-guy Rajo nan Panjang. He has a permeating air of regality and entitlement, and his two fight scenes showcase his athletic prowess. 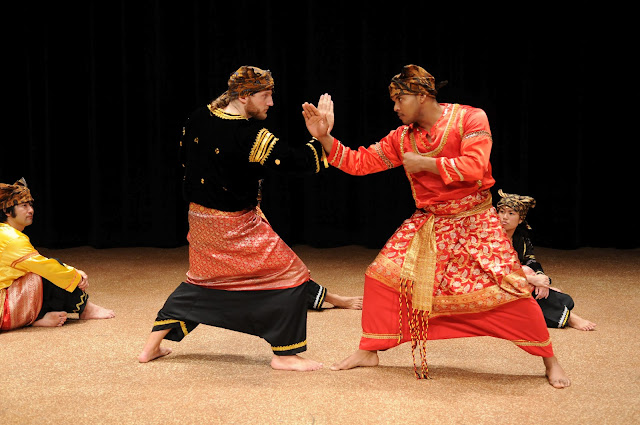 Several performers serve as both actor and dancer, including E. Danielle Belvin, who plays Sabai’s mother with strength and excellent form in the First Act and then does a complete costume change to join the circle of dancers for the Second Act.

The Genteel Sabai at Kennedy Theatre is a rare chance to see traditional Indonesian drama and should not be missed. The fine acting, beautiful music, and excellent movement make it a complete experience that you will feel in your soul. Bravo to the UH Mānoa Department of Theatre and Dance for keeping Asian Theatre alive and well in Hawai‘i.